The most common domestic flea is the cat flea. The flea 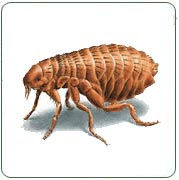 pass through a four stages of life cycle: egg, larvae, pupa and adult. A female can lay more than 400 eggs during their life span of 1-4 weeks. The eggs are laid on the host where they fall off to hatch in the environment. Females require a fresh blood meal in order to produce eggs. Adult emergence is generally though to be stimulated by vibrations of an approaching host, carbon dioxide gradients, sound and light patterns. Adult fleas are the only growth stage that actually live on the pets. Adults are about 1-3 mm in length, reddish-brown to black, and laterally compressed. Their powerful hindlegs are well adapted for jumping and running through hair and feathers. Fleas prefer to develop in areas protected from rainfall, irrigation and sunlight, where the relative humidity is at least 70- 75% and the temperature is 75-79ºF.

It has been recorded that the fleas have existed for at least 55 million years since they have been found stuck inside of ancient amber and has been believed that the fleas used to exist on tree sap and decaying plants. Later they started feeding themselves on the blood of specific kinds of warm blooded creatures like birds, dogs, cats and even humans. According to studies, the oldest species of flea known as the snow flea still has wings but most of them however gave up wings for more efficient hop. 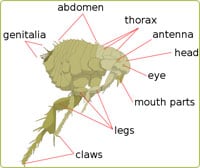 Over two thousand species of fleas have been recorded in which only one species lives on the blood of humans. This species of flea is called Pulex Irritans and usually survives in the human hair. There is yet another species of fleas that use the human hair as a traveling medium until they find a warm blooded creature with blood which it prefers to consume. For example, the dog fleas would stay in human hair so that they can be transported form one dog to another. This is the same case with human fleas that also infect other species of animals living around them.

But you should not reach a conclusion that each fleas species would restrict its territory within the preferred warm blooded creatures. The human flea particularly is not at all discriminating about the blood of the species that it feeds. They would also feast on dogs, cats, monkey rodents and bats along with humans. Moreover if the flea has evolved to live on other species would surely take a bite of humans. And this explains why most of the people suffering from flea problems are exposed to other animals.

People would surely want to know the methods by which the human fleas can be identified opposed to the fleas that prefer other animals. All the flea species would look similar without much difference. The only difference that can be spotted would be in the number of mouth bristles they have which would be very few in comparison to other species. In order to be certain of the specific species of flea that you are dealing with, you need to take the help of microscope or a magnifying lens and also a very good eye sight. Fleas usually tend to bite the humans on the arms and legs rather than on the head.

Flea is capable of transmitting plague and murine typhus to humans, but reports are rare; its primary importance is its nuisance to humans and pets. Bites usually cause minor itching. Some people suffer from flea allergy dermatitis, lasting up to 3-5 days and characterized by intense itching, reddening at the bite site for sensitive skin. Fleas also serve as intermediate hosts of dog tapeworms. Contact us for professional management options.

Some flea species include: