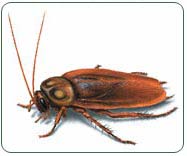 Are there cockroaches in BC and Vancouver? Yes. The German cockroach is the most common species in British Columbia. They can be found wherever moisture, food and shelter are available. Cockroaches (eggs included) are usually brought indoors via our belongings, luggage, boxes or packages.

The Life Cycle of Cockroaches:

Cockroaches have three stages in their life cycle: eggs, nymph and adult. Adults are ½ inch- 5/8 inch long light to medium brown with two dark distinctive stripes behind the head. The young cockroaches, or nymphs, are wingless, and usually only a few millimeters long ; they are white on hatching but darken within a few hours. They grow in stages by repeatedly shedding the cuticle or skin. They are fully grown after several months to 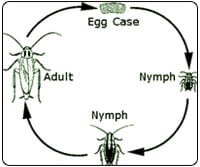 more than a year, depending on the species. Females produce one egg capsule every 3-4 weeks. Each capsule contains 25-45 eggs. The female will carry the egg capsule with her until it is ready to hatch. The young (nymphs) will be able to breed in as little as 36 days. Adult German roaches can live up to one year. They are mostly active at night; in the daytime they hide in cracks and crevices in walls, door frames and furniture, and in secure places such as bathrooms, cupboards other electric devices, drains and sewer systems. If they are seen during the day, it is usually because their hiding places are overcrowded due to a large population or there is a shortage of food and water supply. Any crack or crevice located near a source of food and/or water is prime harborage, and they spend about 75% of their time in such harborages. 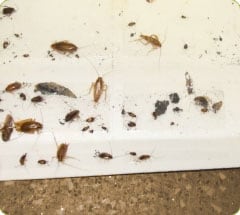 Infestations are generally found in kitchens and bathrooms but can inhabit other areas if there is a heavy population. Roaches eat a great variety of food, including all food used for human consumption. They prefer starchy and sugary materials. They sip milk and nibble at cheese, meats, pastry, grain products, sugar and sweet chocolate. They also feed on cardboard, book bindings, ceiling boards containing starch, the sized inner lining of shoe soles, their own cast-off skins, dead and crippled cockroaches, fresh and dried blood, excrement, sputum, and the fingernails and toenails of babies and sleeping or sick persons.

How are They Harmful?

Cockroaches are able to carry pathogenic bacteria onto food which is responsible for food poisoning outbreaks because of their movement through washrooms, refuse heaps and sewers. Another risk to human health arises from the ability of cockroach egg shells, moulting skin and droppings to cause allergic reactions or asthma that can be very serious for some people. Contact us for professional management options.  There are various kinds of cockroach treatments, depending on the species and extent of the problem.  Call 604-805-0278 for cockroach control services.

The most conclusive evidence of cockroach infestation is simply seeing them in the home. However, it is not that easy to spot then during daytime since they are nocturnal creatures. A distinguishable and pungent odour would also be left behind by the roaches which make it easy to identify their presence. If the infestation is very severe, the cockroaches can be seen during the daytime. This may be because their habitat must be overcrowded or they are in search of food. Since the insects are quite distinctive, they can be easily identified. One of the most prominent signs that the cockroaches have infested your home is by noticing the presence of material called shell casings. These are actually the egg cases from recently hatched cockroaches and are seen as small dark brown oval shaped casings. This would be seen in most places of infestation. Another common sign is the presence of cockroach specks or wastes. It appears dark in colour and is faecal pellets and regurgitated food. It may look like grains of ground pepper.

The insects have been on the earth surface for more than 400 million years. This means that they have proved themselves as good survivors. It has been found out that the cockroaches were alive during the age if dinosaurs. They are in fact considered as the first flying animals. Like termites, some of the species of roaches have the capability to digest wood and feed on them. Sailors on infested ships used to wear gloves while sleeping so as to keep the insects from nibbling their fingernails. Roaches have an intense liking for the glues, especially the ones on envelopes, glue bindings at the back of the books and on the back of postage stamps. They are even capable of living up to a month without their head.  See some cockroach videos.

If you need to get rid of cockroaches in downtown Vancouver, Surrey, White Rock, Delta, Langley, Richmond, Tsawwassen, Pitt Meadows, Maple Ridge, and all metro Vancouver, whether residential, industrial or commercial, call Avon Pest Control cockroach exterminators to learn how we can help eliminate them.