If your home or business is victim to the growing rat problem in Vancouver, Surrey, and all Lower Mainland, then you need a reliable rodent pest control company.

The word rodent means “to gnaw”. Rodents need to be inspected and controlled at the earliest possible stage of menace before it could lead to a more severe hassle. There are various species of rodents but the most often encountered species, which live closely with the human community, are the House mouse, Norway rats and roof rats which are widely represented as “Commensal Rodents” and live in greater Vancouver area.

Roof rat moves within the premises of 98 to 164 ft and a house mouse within 10 to 33 ft. If the situation gets unstable its regular roaming condition will also tend to change, especially in a strange environment where they tend to expand the range of their roaming diameter.

Rats tend to eat most of their food once a day, whereas mice will typically nibble a little throughout the day. Both Rats and mice remain active during the night when rats are pretty cautious in making their move and mice are very curious. Mice aggressively tend to bite anything they smell during their rounds.

Rodents are capable of squeezing through narrow and deep hole; 1/4 inch for mice and 1/2 inch for rats. These species are not only found in homes, but also in warehouses, livestock facilities, restaurants, supermarkets, farm fields and food processing facilities.

Rats are generally black or brown, measuring about 40cm in length and are characterized by a pointed nose, large ears and a long tail. This nocturnal creature has small and sleeker body covered with smooth fur. Rats make their living inside the burrows, mounted cardboards, piles of clothing and wood. They are excellent climbers and often hide in upper structures that are unreached by humans. Female rats can yield four to eight pups at a single litter which means they give birth to about 40 new rodents per year. Rats tend to be the major carriers of the bacterial disease plague.

Mice have covered short hair that often spotted in light brown, black or grey in colour. They are characterized by lighter bellies, long ears and distinguished long straight hair at the snout. Adult mice typically weigh about 12 to 30 grams and can be 20cm long. The mouse makes its living in farm fields, grassy and wooded areas that are generally dark and often in close proximity to food sources. They are very active creatures and always found roaming in wide spread areas. Mice are capable of sensing food materials from a very long distance. A female mouse can yield up to six pups at a single litter and each pup attains to maturity in about 35 days from birth.  Mice have sharp hearing capability and they often produce squeaking sounds when communicating.

Norway rats are comparatively larger rodents than the other species, and measures more than 40cm in length with its tail alone measuring up to 21 cm. It weighs 500 grams and is often spotted with shaggy brown or grey fur with marked scales over its ears and tail. Norway rats live in communities and they preferably make their home in underground burrows through which they can enter into buildings. Females can yield four to 22 pups at a single litter. It is very difficult to spot Norway rats as they literally hide during daytime keeping themselves invisible from humans. The only way to exterminate them is by driving them out of their hiding spaces by passing fumes of rodenticides, keeping bait or by placing traps.

Destruction Caused by Rodents – Why are they pests?

It is been stated that rats and mice are the cause for 40% of food loss worldwide. Besides chewing food they also tend to contaminate it with their fur and excreta. 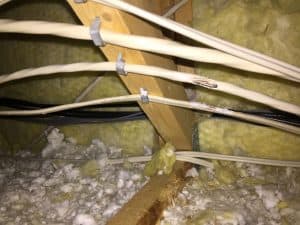 They create a big mesh especially in residential areas by their burrowing and gnawing activity. They can gnaw through and damage your walls and barriers under your roof. Rodents tend to gnaw even the rigid materials including lead sheathing, cinder block, aluminium siding and some concrete.

Almost similar to bio-war, some people can become victim to Plague, a contagious bacterial disease mainly carried (but not caused) by rodents.

Your electrical system can be greatly compromised also.  Here’s a photo we took in a Vancouver attic showing dangerous damage to wires caused by rats.

Mice are not as damaging as rats, but they can at least be annoying.

The presence of rodents can be sensed through some signs such as:

Many methods have been deployed for rodent control. Among those methods, traps and baits are considered to be the most effective in knocking down its population. Rodent baits work well in controlling large rodent populations. After baiting, continue with sanitation procedures like cleaning away the baited food source and seal harborage as no rodents tend to stay in your home.

Traps are another effective tool in the war against them. But, finding the right sized trap is a challenging task as the size could vary with rats and mice. Place traps a couple feet apart in case you deal with mice. For rats, place the traps about 15-20 feet apart.

Mice are harder to prevent than rats, since mice can squeeze through into very tight spaces, but rats can be blocked by placing wire mesh around the openings in buildings that are often a result of quick sloppy construction that doesn’t think of pest control.